Can I Bring My JBL Flip 5 In The Shower?

When looking for a new speaker, mobility and sound quality are the most important elements to consider.

Electronics and water have never mixed nicely in the past. It used to be that taking a portable speaker into the shower was a no-no.

The JBL Flip 5 claims to be completely waterproof.

Can you, however, take the Flip 5 into the shower without risking damage?

Is it okay if I take my JBL Flip 5 into the shower with me?

The JBL Flip 5 may be used in the shower without causing damage. They’re somewhat waterproof, so you can listen to them in the shower, in the rain, or by the pool. When entirely submerged underwater, they have some troubles, although a shower is good for the JBL Flip 5.

JBL’s Flip speaker has been partially waterproof over the last few iterations.

In other words, you could bring them near water, even into the shower, but submerging them in water could cause damage.

It might not have been a big deal if your child accidentally splashed the Flip 4.

But what if they dragged it below because it would make a fantastic pretend submarine? Yes, it’s time to bid your lousy speaker farewell.

Even dampness from the shower may cause chaos if the seals on your Flip 4 were not securely closed.

Even with the seals completely closed, several people complained that humidity caused the speaker to switch on and off and go into Connect+ mode until they forced it to power down permanently.

The JBL Flip 4 was waterproof to IPX7 standards, and the JBL Flip 5 is as well.

However, there appears to be a difference in how well the JBL Flip 5 manages everything from a few drops of water to complete immersion in water, as well as humidity from a hot shower.

So, if you’re thinking of putting your Flip 5 into the shower, you can rest easy knowing that it’s fairly difficult to ruin this device with water.

However, there are a few considerations to be aware of before using the Flip 5 in other water-related environments.

Would you like to learn more about the Flip 5’s capabilities?

Continue reading to learn more about IPX7 certification, what previous-generation speakers can do, and where else these portable speakers can be used securely.

What exactly is IPX7 certification?

IPX7 certification is a water-resistance rating given to a product. That is the rating of these JBL speakers.

The IP stands for “International Protection,” and there are nine degrees of protection ranging from 0 to 9.

IPX7 is a Level 7, as you could have guessed.

This means you may submerge these speakers in water for up to 1 meter (3.3 ft) without them being damaged.

To put it another way, a product must have an IPX7 or higher rating to be considered waterproof.

Some manufacturers make use of the phrase “waterproof” and use it to describe products that are actually IPX certified at a lesser level (such as IPX4, which can get splashed but not be submerged without damage).

This is a typical occurrence, so make sure to read labels and user reviews before purchasing anything. 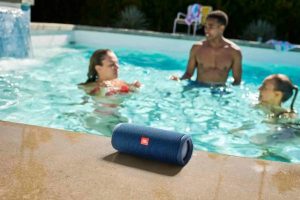 Are you curious how the Flip’s earlier generations compare?

JBL deleted the jack input and hands-free kit function from this model, which has been problematic in the past.

They also improved the sound quality of the Flip 5.

The Flip 4 does come with a waterproof cloth cover that was rated IPX7.

And, for the most part, it appeared to be successful.

However, the Flip 3 was only classified as “splash-proof,” so you wouldn’t be able to use it in the shower.

You wouldn’t want to get it wet in the rain, either.

Is it also safe to use at the beach?

You can take the JBL Flip 5 to the beach with you.

You may keep it secure from the sand by placing it on top of a flat-lid cooler.

As you can see, sand is still a problem for a lot of electronic devices.

Because portable speakers have so many tiny holes all over them, it’s quite easy for sand to get inside.

If you drop the Flip 5 or your kid uses it as a sandcastle tower, you might end up paying more than $100 for this speaker.

Proceed with caution because these microscopic grains of sand are harsh on electronics.

Please be aware that this speaker is really loud.

I’m not going to lie: the JBL Flip 5’s sound is quite loud.

(If you’ve ever been in a choir, your instructor most likely told you to practice singing in the shower for this reason.)

So, what happens when you place a loudspeaker in an environment where sound is amplified naturally? A speaker with a lot of volumes.

Some customers claim it’s too noisy to use in the shower, so they put it on the sink counter instead.

This isn’t necessarily a bad thing because it demonstrates JBL’s ability to create excellent portable speakers, but it is something to be aware of before giving it a try.

What if I drop my speaker in the bathtub by accident?

You may drop your Flip 5 in the tub without worrying about water damage because it has an IPX7 certification.

It will most likely survive being kidnapped and carried into the bath by a child.

However, you must use caution when dropping speakers from a height of a few feet onto any solid surface.

These speakers are not impervious to damage when dropped.

The materials are rather long-lasting.

Even the new Flip 5 Eco, which is 90% recyclable plastic, is susceptible to drop damage.

It’s not something you want to happen on a regular basis.

Off-colored stains have appeared in regions of the casing where damage was incurred, while some claim that the drips completely destroyed the inner components.

Okay, here’s a customer complaint about the Flip 4.

Some people believed that steam from the shower was damaging the speakers.

This should not, however, be the case.

The Flip 4 and 5 are both IPX7 rated, which means they should be able to withstand steam damage.

What about Flip 3 and earlier? Those, on the other hand, were given far lower IPX ratings and were likely to be harmed by steam if they were exposed to it for long periods of time. However, neither the Flip 4, Flip 5, or Flip 5 Eco are expected to experience this.

Don’t be concerned about carrying your new JBL Flip 5 portable speaker into the shower.

With an IPX7 rating, this model should be able to withstand water.

It won’t be harmed by splashes or steam, and you may even submerge it in a few feet of water.

Remember this piece of advice: no speaker is immune to the effects of a few grains of sand.

It’s one thing to have water, but it’s quite another to have sand. While at the beach, be cautious, but in the shower, proceed with unbridled fun.

Why Are My Beats Flex Not Turning On?

Sharing Apple Music With Family Outside Of The US