Home » Tech » Can the Nintendo Switch Connect to a PC Monitor?
Tech

Can the Nintendo Switch Connect to a PC Monitor?

If you have an amazing computer monitor you would like to use rather than a giant TV, that maybe isn’t a problem, I love playing my Nintendo Switch with it docked to the TV.

It was much easier than I expected to connect my Switch and a monitor.

Is it possible to connect the Nintendo Switch to a computer monitor?

The process of docking the Nintendo Switch to a display is straightforward, although there may be occasions when a different connection is required or when a little glitch prevents it from operating.

I’ll take you through the entire process step by step so you can swiftly replace your TV with your monitor.

Connecting Modern Monitors to the Switch

How do I tell the difference between contemporary and older monitors? The HDMI port is the most important feature to look for.

The majority of new PC displays feature an HDMI connector, which makes the process considerably easier.

You have an older monitor if it has a DVI port.

That’s OK, and I’ve included instructions for attaching the Switch to older displays further down.

In any case, I’ll lead you through the entire procedure.

Continue reading to learn how to accomplish it.

To connect your Switch to a TV, you’ll need to acquire all of the necessary equipment.

The Switch itself, whether standard or OLED, the TV dock, the power cord, and the HDMI cable are all included.

This isn’t something you can do with Switch Lite.

Because the hardware was not designed to export video data, it is unable to connect to a television or monitor.

There are two ports on the rear flap of the Switch TV dock.

The HDMI cable is in one, while the electricity is in the other.

A nearby outlet must be linked to the power cord.

Connecting the Monitor and the Switch

Now you must connect the Switch and the monitor.

This is accomplished via the HDMI cable and monitor port.

On the display, look for the HDMI port.

Connect one end of the wire to the display and the other to the HDMI connector on the Switch dock.

As a side note, regardless of the operating system, I discovered that this works great on any display or computer.

The HDMI port is the most important feature.

The Switch’s functionality is unaffected by the operating system. 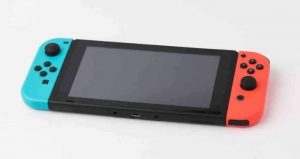 Can the Nintendo Switch Connect to a PC Monitor

Set the computer monitor to HDMI mode after turning it on.

This is usually accomplished by pressing the buttons on the display.

A button to alter the input should be included.

If the monitor is linked to a tower or is all-in-one, the operating system can switch it to HDMI mode.

Turn on the switch now. The Switch output should appear on the display as if it were a TV.

Your favorite Switch games may now be played on a PC.

Connecting Older Monitors to the Switch

As previously stated, the HDMI connector on your display was critical in allowing the Switch and monitor to interact.

While HDMI connections are now standard on most displays, this was not always the case with earlier monitors.

If your display is outdated, you won’t see an HDMI port. Instead, you’ll discover a DVI port.

Although this signal is similar to HDMI in that it provides both audio and video data, the port itself is rather different.

While the connection is different, you may connect the Nintendo Switch to a DVI display using a workaround.

Connecting the Switch to an older display is similar to connecting to a TV or a new monitor.

You’ll need a standard Switch or an OLED, as well as a TV dock and a power cord.

The HDMI cable is the only component you might not require. More information about this may be found in the next section.

Connect the power cord to the TV dock.

Place the Switch on the dock if you’d like.

You’ll need a means to convert HDMI to DVI signals. It’s not as difficult as it appears.

This may be accomplished with either a specific cable or an adaptor.

There will be one HDMI head and one DVI head on an HDMI-to-DVI connection.

Connect the HDMI side of your Switch to your monitor, and the DVI side to your Switch.

An HDMI-to-DVI adapter is a device that connects to the DVI port on your display.

The HDMI head may then be inserted into this port.

Both perform the same thing when it comes to converting HDMI data to DVI.

I like to use an adapter since it allows me to utilize the HDMI line for other things, but an HDMI-to-DVI cable would suffice.

Putting the Connection Together

This is the same as connecting the computer to a contemporary display.

Set the display to DVI mode after turning it on.

When you turn on the switch, the video output should appear on your screen.

The Connection Has Failed

Have you tried everything and it’s still not working? If that’s the case, let me provide some troubleshooting advice to help you resolve the issue.

This is usually a simple repair.

Resetting the AC adaptor is the initial step in troubleshooting. For 30 to 60 seconds, unplug the power. The adapter may now be reset.

Reconnect the Switch and monitor by plugging it in again.

Most of the time, this should solve the issue.

You may not realize it, but all of the wires are arranged in a precise order.

The power cable must be plugged in first, followed by the HDMI cable.

It will not function if you connect the HDMI cable first.

Start by unplugging all of the cords, starting with the power cable and moving on to the HDMI cable.

This is another typical solution that should resolve the issue.

The Switch may require a firmware update from time to time.

This usually doesn’t prohibit it from connecting to a TV or monitor, but it can happen.

Check for updates and install them if they are available.

If the troubleshooting techniques above don’t work, the issue might be with the wires themselves.

Examine the cords for any damage and double-check that they are connected to their right ports.

If the damage is internal, you may wish to purchase new cables.

Which Headphones Can Connect to 2 Devices