Can the Sony WH 1000 XM3 Connect to Multiple Devices

If you’re lucky enough to have a set of Sony WH-1000XM3 noise-canceling headphones, you’re undoubtedly searching for methods to get the most out of them and better incorporate them into your life.

You might be wondering if you can use them to connect to your phone, iPad, Playstation, and all of your other gadgets at the same time.

Is it possible to connect the Sony WH 1000 XM3 to several devices?

The Sony WH-1000XM3 is capable of connecting to a variety of devices. It was created to allow users to switch between tablets, laptops, desktop computers, cellphones, MP3 players, and a variety of other Bluetooth-enabled devices rapidly. The Sony WH-1000XM3 headphones, in fact, can connect to up to eight devices simultaneously.

After all, what good is a decent noise-canceling Bluetooth headset if you have to deal with the trouble of detaching, uninstalling, and reconnecting to each device one by one?

The WH-1000XM3 is one of Sony’s more costly consumer headphones, but its $349.99 price tag is justified by the WH-1000XM3’s high quality of life features, as well as its durable great build and audio quality.

This Sony device boasts many features, from the QN1 HD noise-canceling processor to built-in NFC and Adaptive Sound Control.

But it’s the NFC and Bluetooth features of the WH-1000XM3 that we’re interested in.

These headphones are ideal for tech-savvy audiophiles, with the ability to connect to devices via simple one-tap NFC features and the dependable power of Bluetooth 4.2.

What is the maximum number of devices that the Sony WH 1000 XM3 can connect to? 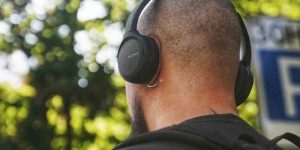 The WH-1000XM3 headphones from Sony may connect to up to eight devices at once.

The ideal companion for people who go from gadget to device throughout the day.

While these headphones can connect to eight different devices at the same time, the connection is still restricted by the typical Bluetooth range of thirty feet (or ten meters).

This might be terrible news for would-be Bluetooth spies.

For the rest of us, this simply means that items out of range won’t use up one of your Bluetooth connections.

It also implies that if you’re using your smartphone, you’ll want to keep it close by or in the same room as you.

How to Connect the Sony WH 1000 XM3 to Multiple Devices

Now that you’ve learned how powerful the WH-1000XM3’s Bluetooth connection is, it’s time to put it to work.

Pairing Bluetooth headphones is already a straightforward affair, but Sony chose to make it even easier by including NFC technology.

You have two options for connecting your headphones to your devices thanks to Sony’s design ambition.

Bluetooth is used to connect.

The first way to connect your WH-1000XM3 headphones to your smartphone is to use the Bluetooth settings on your device.

The procedure is similar to connecting to any of the many other Bluetooth devices you’ve encountered.

Your Sony WH-1000XM3 headphones should now be connected to your phone.

Even while this approach only requires three steps, there is a quicker option for Android smartphones that use NFC.

The gadget should connect to your headphones immediately.

Even though it is just one step shorter than the standard approach for connecting Bluetooth devices, it eliminates the effort of navigating through several settings and Bluetooth choices.

I’d use the power button anyhow, but Sony’s inclusion of an additional use case for the NFC connection is clever.

Changing from one device to another

You’ve probably noticed that just the last device or two to pair with the headphones are still linked now that you’ve connected your devices to the headphones.

This is because the number of devices that can transmit signals to the Sony WH-1000XM3 is limited.

With the exception of twin device connections for audio and phone call sharing, only one signal can be active at a time.

This implies they can only be actively linked to two devices at a time and can only receive signals from one of them.

You may use one of two techniques to swap your headphone’s Bluetooth connection from one device to another.

If you move to a device that supports NFC, just touch the back of the left ear cup with the device to reconnect.

If your device doesn’t have an NFC capability, visit the Bluetooth settings and choose the headphones’ name from the associated devices list.

The headphones will be disconnected from the device they were previously attached to as a result of this.

It will then connect to the currently connected device.

The connection between many points

For various reasons, some WH-1000XM3 owners will desire to keep their devices linked to two distinct devices.

Owners who have work phones and personal devices are in a similar predicament.

Most businesses that provide corporate gadgets have rigorous guidelines for how they should be handled and maintained.

This frequently means that the programs and software that most people use to spend their time are not allowed to be installed.

As a result, the majority of workers who have company-issued cellphones will also have a personal device.

It allows them to keep a clear distinction between work and pleasure.

There’s also the possibility of connecting to a music player that isn’t connected to a smartphone.

Keeping two Android smartphones linked to one headset is an uncommon case for a multipoint connection.

The WH-1000XM3 can maintain a connection with both devices in all of these scenarios.

It will, however, only divide use by splitting functions.

This means you may use one device for calls and the other for music streaming without having to switch which device is linked to the headphones.

To connect two devices and choose which one handles which function, follow these steps:

After that, you should be able to connect both of your devices.

The audio player on the other device will halt if you accept a call from the device you choose to make and receive calls.

When the call is finished, the music will continue to play, exactly as it would on a single device.

If Sony’s WH-1000XM3’s strong and efficient noise-canceling capabilities weren’t enough to win you over, quality of life features like NFC pairing and multiple Bluetooth connection compatibility elevate the experience to new heights.

It’s never been simpler to go from laptop gaming evenings to lo-fi rhythms to work to on the move.

You’re ready to go mobile with a single tap from my phone to the left ear cup.

With a little practice, you’ll be able to manage your WH-1000XM3’s Bluetooth connections and transition from device to device like a pro.

Is it possible to listen to music from many devices at the same time?

Unfortunately, you will not be able to do so. I’m not sure why you’d want to, though.

Is it possible to exchange music from my WH-1000XM3 with another set of Bluetooth headphones?

The WH-1000XM3 from Sony isn’t compatible with any other Bluetooth headset. Most systems, on the other hand, allow you to connect two distinct headphones for a shared audio experience.

To link the WH-1000XM3 with another device, do I need to disconnect it from my device’s Bluetooth connections?

Unless you’ve paired them to more than eight devices, these headphones don’t need to be removed or forgotten on one to be connected or matched to another.

How To Connect AirPods To MacBook? (Explained!

How To Change The Background On A PS5