Can You Change Playback Speed On Apple Music?

Apple Music, Apple’s streaming service, is a successor to iTunes and a key rival to Spotify.

The Music app is the default audio playback application for iPads and iPhones, thus it’s a standard offering for iPhone users.

As a result, Apple consumers should expect to spend a lot of time using the Music app.

With enough time, you may amass a sizable music library as well as an audiobook or podcast collection.

Is it possible to change the playback speed on Apple Music?

On the Music app, there are a few options for changing the playback speed. They are, however, only accessible for audiobooks. You’ll need to buy material and utilize an alternate music player like Flacbox from the App Store if you wish to play your music at different speeds.

Third-party developers are supplying the need since there are a variety of reasons to wish to change the playing speed of your music.

Whether you’re looping audio for a track, speeding up a podcast or audiobook to save time, or examining records, you’ll need to do some research to find the best option.

The good news is that the majority of these applications come with free trials or versions.

In Apple’s case, the Music app just has the basic play/pause, forward, and reverse controls.

The Music app will skip back or forward one song on the playlist if you double-tap either the reverse/rewind or forward icons.

Music was recorded and finished the way it was supposed to be heard, which is why Apple has opted to omit playback speed choices for music.

This is a totally appropriate position for most audio listeners.

However, some individuals require the capacity to speed up, slow down, and loop audio segments for research, investigation, and audio remixing.

How Do I Change Apple Music’s Playback Speed? 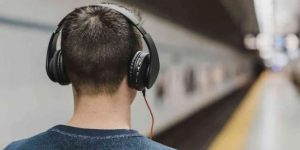 In Apple’s Music app, you can only modify the playback speed of audiobooks or podcasts.

To listen to audiobooks, simply look for the “1x Speed” button in the lower right corner.

This option will cycle between playback rates if you press it.

The initial tap will increase the pace to double that of normal.

The second time will reduce the pace to half that of the first.

The third tap will return it to its default state. The Podcast app will be used to listen to podcasts.

There is also a “1x” option in this app player. When you tap this option, it will cycle from 1x to 1.5x (50 per cent quicker than ordinary speed) to 2x (double regular speed) and back to 1x.

You may use one of these Apps from the App store to listen to other audio files than audiobooks:

If you go a little deeper, there are still plenty of options to select from.

On Apple Music, how can you slow down the music?

The Songs app does not allow you to slow down the music.

Apple Music is the only place where you may change the playback speed of audiobooks.

I propose using one of the music player choices described in the preceding section if you wish to listen to songs at a slower pace.

You’ll need a music player with a 0.5x speed if you want your audio files to play slower.

Anything less than 1x is slower than usual.

If you’re working on a computer, there are a plethora of audio apps available to assist you.

You can use a more powerful media player, such as VLC, or an audio editor, such as Audacity.

How Do You Quicken Apple Music Playback?

Except for audiobooks, there is still a playing speed option for audio that is not accessible on the Music app.

I’ll have to recommend one of the apps or tools recommended in the preceding sections if you wish to speed up your music playback.

GarageBand is an Apple-supported programme that can accomplish this.

A VLC player is recommended if you wish to be able to navigate through your media library.

VLC is a long-running media player with all of the extra bells and whistles you might want.

The user interface is the one area where it falls short.

Although the location of playback controls and settings is excellent, the graphic skins are really plain and uninteresting.

There are several more options that may appeal to you more visually.

Searching for “media player” or “music player” on the app store is the easiest approach to find what you’re looking for.

Playback speed control will be the name of the function you’re looking for.

Start with the list I’ve previously generated in the second portion of this post if you want to save time.

On an iPhone, how can you change the music’s speed?

Except for audiobooks, Apple Music, the iPhone’s default music player, does not enable playing speed settings for any audio file. Other applications, on the other hand, do.

In the post above, I’ve compiled a collection of apps and programmes.

Listeners of podcasts frequently raise the playing speed to 1.5x or 2x.

Because the audio is primarily personal discussions, speeding it up can help you obtain a lot more information in a shorter amount of time.

Why can’t I change the playback speed in the Music app?

Apple has a long and illustrious history with audio.

Apple has made a commitment to quality from the early days of iTunes and the iPod to the current streaming options accessible.

This indicates that the programme is built to retain audio quality and integrity for the intended function.

For music, this guarantees stable quality and playing at 1x speed.

While adding playback speed controls and other features may appear to be a simple task, there are more aspects to consider for app design and usability than individual actions.

On Apple products like the iPhone and macOS, the Music app was supposed to be the key player for music and streaming.

The design was kept basic, recognisable, and straight to the point.

When it came to music, playback speed was seen to be a minor concern.

Audiobooks, on the other hand, include playback speed control choices.

Audiobook listeners are considerably more likely to raise the pace of an audiobook.

The primary substance is not lost when the audio speed is raised for those readers who speak slowly.

On the other hand, some people have a penchant for slamming words together hastily.

The half-speed playback option might assist you to figure out what you could have misheard in this scenario.

What is the best iPhone app for controlling audio playback speed?

VLC Player is the greatest overall programme in terms of features for the playing speed of your digital media library if you aren’t striving to be an audio engineer.

It contains a large number of audio codecs, allowing it to play any audio file as well as video files.

Playback speed adjustments, playlist generation, and more are all included.

VLC Player is a utility programme first and foremost.

VLC isn’t the best choice if you want your media player programme to appear fancy.

As an alternative, I would suggest Flac Box.

Why is Spotify so Quiet on Bluetooth?

Does Apple Music Use Data? (I was shocked!)