Home » Tech » Can You Charge An iPad With An iPhone Charger?
Tech

Can You Charge An iPad With An iPhone Charger?

In today’s world, almost every home has at least one Apple gadget.

They’re sleek, glossy, and fun/easy to use, plus they come with everything you could possibly need, including a cord and converter.

Will an iPhone charger, on the other hand, be able to pick up the slack if your iPad charger goes missing?

Is it possible to charge an iPad with an iPhone charger?

An iPhone charger may be used to charge an iPad. Apple altered its charging cords many years ago to make them smaller and universal, so iPhone, iPad, and AirPod chargers are all the same design and may be used interchangeably. There will be no issues as long as the models are not old.

Everyone is grateful to Apple for making these adjustments since charging is now easier than before.

Despite the cable similarities, you may have observed that the charging bricks/adapters are frequently different.

Continue reading to find out why this is crucial to know!

Chargers for iPad vs. iPhone 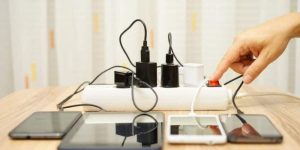 If you’re like the majority of people, you’ve probably questioned if there’s a difference between iPhone and iPad chargers because they all seem the same nowadays.

The majority of people are unaware that there are variances not just in cables but also in power adapters (aka charging bricks).

While you can charge your iPhone/iPad with just about any USB power adapter, Apple does make a handful that has various amperage/wattage rates.

The difference between iPad and iPhone chargers is determined by these amperage/wattage values.

Let’s talk about one thing before we go into the numerous chargers and adapters. If you have an older iPad (a 3rd generation device, for example), you won’t be able to charge it with your iPhone charger.

This is due to the fact that the 3rd generation and older iPad models used a 30-pin charger instead of a lightning connector.

This won’t be an issue if both of your gadgets are modern and have the same type of wire.

iPads, regardless of generation, usually come with a 10W (10 watts) or higher charger and adapter.

10W is a lower amperage on the amperage scale, and it’s most commonly associated with previous iPad and iPad mini models.

The reason is simple: iPads are larger and require more electricity to completely charge than iPhones.

iPhones often come with a 5W charger, which is the lowest wattage available.

While this is wonderful for phones, iPads require more processing power.

A higher-wattage converter would charge an iPad and even an iPhone faster than a 5W charger, according to Popular Mechanics.

So, if you’re going on a road trip and don’t want to tote about a thousand different cables and bricks, go with the largest adaptor you have.

This will ensure that all of your gadgets charge quickly!

Returning to the original question, an iPad may be charged using an iPhone charger; but, it will not charge as rapidly as you would want.

You should probably use the original charger and adapter if you know you’ll need your iPad for something critical and need it to change rapidly.

In a pinch, a 5W charger will suffice.

You might be wondering whether a high-amperage adaptor can damage an iPhone or vice versa.

Fortunately, you don’t have to be concerned about this.

Apple batteries are complicated, but one thing that’s certain is that they’re all built with protection circuits to keep them from being overloaded when exposed to high amps.

The Evolution of Chargers 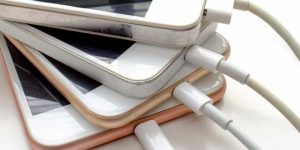 Almost all Apple chargers now have the same design (except for MacBook chargers and adapters).

As previously stated, they may all be used interchangeably. This wasn’t always the case, though.

There was a time, believe it or not when lightning cables were not available.

Apple has produced at least three or four different cables in the previous few years.

A 6-pin FireWire connection was the first.

This was a short black cable that was utilized until dock connections with dock to FireWire connectivity were developed for the 3rd generation iPods.

FireWire was eventually phased out as USB became the more popular and preferred option.

The 30-pin charger is now available! You’re probably more familiar with the 30-pin dock connector than with the FireWire wire.

The 30-pin chargers were white in color and had a long, thin design.

For a long time, this was the most frequent charging option for iPods, iPads, and iPhones.

This charger is for devices that are 3rd generation or older.

The lightning cable (or lightning connection) was introduced to the public sometime around 2012 when the 30-pin chargers became less popular.

Believe it or not, a significant proportion of Apple consumers initially despised the move.

This is because, at the same time as the lightning cable was released, headphone ports on iPhones began to vanish, and Bluetooth headphones were not as dependable or popular as they are now.

People were unable to purchase headphones made by anybody other than Apple as a result of this.

It also meant that you couldn’t charge your iPhone and listen to music at the same time, which was a significant annoyance for many people.

Apple did, however, produce a lightning adaptor, which makes it simple to connect updated iPhones to speakers, docks, and other devices.

There are plenty of cords and power adapters available to charge your iPad whether you’re at work, on a plane, or in the vehicle.

All you have to do is make sure the cable is in good working order and that you have enough time to charge your gadget sufficiently so that you may use it without anxiety.

Are iPads Cheaper At Costco?

How Do I Fix the Static Noise on My JBL Speaker? (Fixed!)