Home » Tech » Can You Pause AirPods by Tapping?
Tech

Can You Pause AirPods by Tapping?

It is very convenient to interrupt music and podcasts by simply putting your ear to your ear.

I do not need to move my things around to find the pause button on my phone, so I can instantly devote my attention to what requires it.

Having worn the 1st and 2nd generations of AirPods for a few years now, I am confident that I can offer insight into how to make the most of your AirPods.

Can you pause AirPods by tapping them?

The double-tap gesture on AirPods of the first and second generation activates Siri by default. If you choose both left and right earbuds, you can assign each ear to perform its function, like playing/pausing audio, next/previous track, Siri activation, etc.

It is possible to turn off the double-tap gesture feature if you become annoyed by it.

The situation has changed with the introduction of newer editions of the AirPods, such as the AirPod Pros.

Previously, the double-tap feature was only available on older versions and could only be used for one function at a time.

You can use gestures such as double-tap, triple-tap, and long press to operate the AirPod Pros directly from the earbuds.

I believe that you must take full advantage of the features of your AirPods, so let’s begin.

Gestures and commands for AirPods

You should learn how to use Apple AirPods’ limited list of touch gestures and master the use of Siri voice commands if you plan on taking full advantage of your AirPods.

This feature allows you to listen to podcasts, manage your phone calls, organize your daily activities, perform quick searches, and do just about anything else that Siri is capable of.

We should take a moment to become familiar with the touch gestures before diving into Siri’s world of commands.

Most Bluetooth earbuds utilize touch gestures for controlling their music.

You can pause, play, or switch tracks simply by properly touching the earpieces.

When using AirPods, there are two sets of touch gestures.

Your first step will be to identify the model of AirPods you have.

This will be a straightforward procedure if you have the first or second-generation AirPods.

The AirPod Pro owners, on the other hand, will have a bit more to get used to.

A maximum of two gesture functions can be enabled simultaneously on the first and second-generation AirPods. Double-tapping can be performed by each ear.

You can select this button to activate Siri, play or pause music, move to the next track, move backward, or do nothing at all.

Here are the steps to set your AirPod touch gesture commands:

One ear can be set to pause or continue audio playback while the other can be used to change tracks.

It is not recommended to use the touch gesture for Siri.

You should instead use your iPhone’s “Hey Siri” feature.

As a result, simple controls can be accessed quickly and voice commands can be used effectively.

Other settings for AirPods

The AirPods Bluetooth settings also provide two additional options that you should consider.

The first of these is automatic ear detection.

If you enable this option, your iPhone will detect when you are wearing AirPods instead of just removing them from their case.

When your AirPods are removed from your ear or fall out, the audio will automatically pause.

It is a fantastic feature for those who wish to listen to the audio while exercising.

There is also a microphone control option available in the AirPod Bluetooth settings menu.

This should be left on automatic.

The microphone can, however, be turned off if you are a security-conscious person who only intends to use your AirPods to listen to audio.

Several other brands of devices have been using a similar system for some time, such as Samsung Galaxy Buds and Bose Quiet Comfort.

Apple is doing a good thing by listening to its customers’ complaints and adding similar functionality to the AirPods.

There is only one downside to the AirPod Pros: they do not support touch gestures.

It is only possible to customize the long-press gesture, and even then this can only be set to one of two options.

I would like to give you an overview of the various touch gestures you can use with your AirPod Pros and what they do. 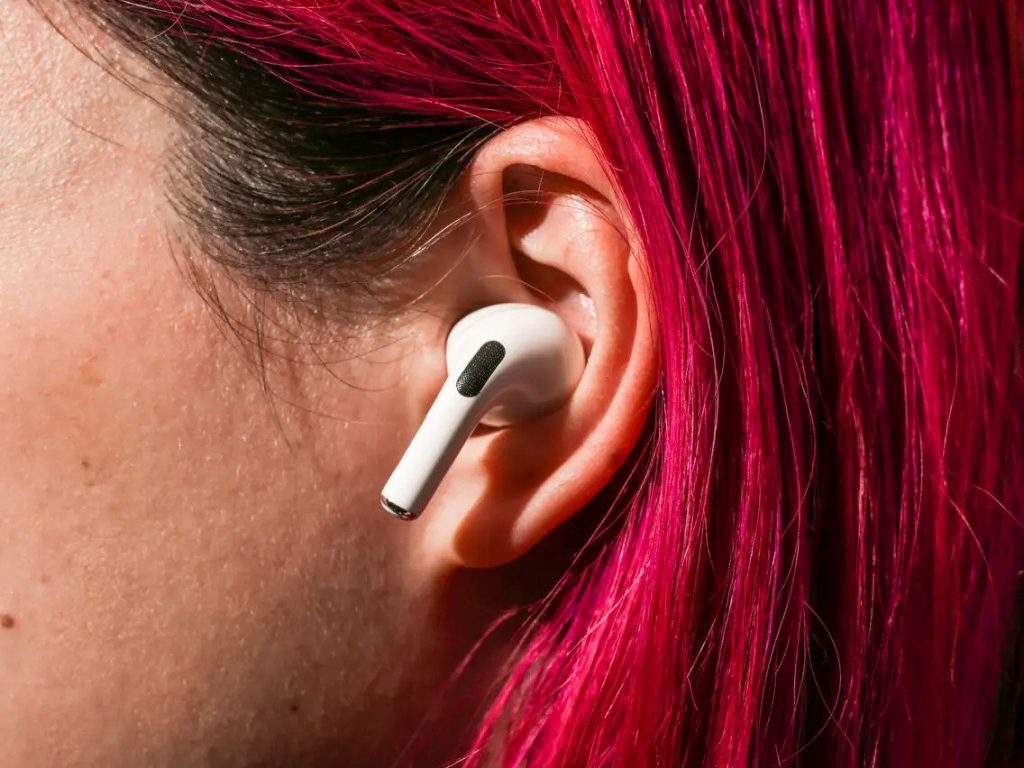 A single tap is the most traditional form of touch control.

A light squeeze on either one of the AirPod stems or tapping the force sensor once is sufficient to activate the sensor.

Your current audio will be paused, the next audio file in the queue will be played, or previously paused audio files will be resumed.

The force sensor is very sensitive. Be careful not to overdo your gestures.

Give yourself some time before you attempt to repeat the single tap if you feel you might have messed it up.  The AirPods would likely interpret a second tap as a double tap if you immediately press again.

By performing a double-tap gesture on the screen, it is possible to move to the next track on your playlist or album.

It is simply a matter of tapping twice on the force sensor or lightly squeezing one of the AirPods twice.

AirPods are sensitive once again.

The gesture may be interpreted as a triple tap or multiple double taps if you accidentally double-tap more than you intended.

It is important to make sure you do not have to navigate through half an album or playlist to reach your original location.

There is no harm in overdoing the double-tap gesture.

It is sufficient to repeatedly tap the AirPods force sensor or lightly squeeze the AirPod stem three times in a row.

You should now be able to move your device to the previous track.

This is the most number of taps that your AirPods will recognize, which makes it difficult for an unintended user to make this mistake.

Your AirPods will not be able to understand the long-press gesture.

It is possible to set this gesture either to activate Siri or to activate the Noise Control option of your AirPod Pros.

This gesture can also be programmed differently for each earbud, just as the double-tap customization available on the first and second-generation AirPods.

If Siri were to be used with voice activation rather than touch gestures, then one could have access to both commands at all times with only two possible commands.

There are three modes of noise control.

You can cycle between them by holding down the long press.

It is primarily used for Noise Cancellation, which blocks out external sounds.

It is an excellent solution for added privacy and blocking out distractions around you.

It may sometimes be necessary for you to be able to hear what is being said.

During these times, you may choose the “Transparency” mode.

It is easier for external sounds to filter through transparent surfaces.

There is still a small degree of noise cancellation, but you should still be able to hear the speakers nearby when listening to audio. The final mode turns off the Noise Control feature.

With AirPods, you can control your audio not only using touch gestures but also using voice commands.

It is Apple’s virtual device assistant available on several Apple products, including the iPhone, iPad, iMac, Macbook, and Apple Watch.

Due to the rapid expansion of voice recognition and smart assistant technology, voice commands have become increasingly useful.

It is amazing how many tasks can be finished and organized solely through the use of your voice with enough practice.

You may be interested in exploring some of the different ways voice commands can be utilized if you have not already done so.

Some voice commands to get used to using Siri:

It is easy to control your audio through touch gestures on the go.

The Apple AirPods are no exception, especially because Apple was one of the first manufacturers to release wireless earbuds.

You can control your music by tapping the force sensor on the earbud if you have the first or second-generation AirPods or AirPod Pros.

You should also consider integrating some voice commands to enhance your productivity.

Having the ability to command your phone is also a fun experience.

Particularly when it does not respond.

Why Can’t I Answer Calls on My Airpods Pro? (8 Troubleshooting Steps!)

How To Unforget A Bluetooth Device