How to Force Quit on A Mac With The Keyboard

When users are using their Mac, programmes or websites will occasionally freeze.

Users must force to quit the programme in order to exit it.

How can you force quit a Mac using the keyboard if the mouse isn’t working?

On a Mac, how to Force Quit Using the Keyboard

On a Mac keyboard, press option, command, and escape (Esc) at the same time to force quit. After that, the app should close. If forcing a shutdown doesn’t work right away, wait a few minutes and try again. If force quitting doesn’t work after a few minutes, use the power button to shut down the Mac.

When an app stops responding, it’s always a pain. Fortunately, you can resume the software with force quit.

Continue reading to learn why it’s sometimes important to force yourself to quit.

It is necessary to close a programme or your internet browser if it becomes unresponsive.

It may appear that all hope is lost if the cursor stops reacting.

Fortunately, you can use a keyboard shortcut to force-quit programmes on your Mac.

How to Force Quit on a Mac using a Keyboard

After you click Force Quit, the programmes you chose should close.

When the Force Quit button is highlighted in blue, click Enter if your cursor isn’t working or appears as a colourful spinning ball.

If it still doesn’t work after a few minutes, restart your Mac or shut it off.

What Should You Do If Your Mac Doesn’t Force You to Quit?

Your Mac will need to be rebooted if you used Force Quit to quit out of non-responsive programmes or web browsers.

Turn your Mac back on and wait for it to boot up after a few minutes.

You can also shut down your Mac by simultaneously pressing the Control, Option, Command, and Power buttons.

Hold down the Control, Command, and Power keys until the screen turns black.

When you force your Mac to restart, any apps and browsers that were open at the time of the shutdown are closed.

You’ll have to reopen them, but after you do, they should start working again.

If you shut down your Mac while using a web browser, you can recover the tabs you were working on by going into the history and re-opening them.

If you were working on a document that didn’t save automatically, however, shutting down your Mac will result in the loss of all work you’ve done since the last time you saved it.

Fortunately, a Mac keyboard shortcut allows you to save documents.

To save documents on your Mac, simply hold down the Command and S keys at the same time. You don’t need to restrain them.

You can also save the document by going to the File tab and pressing Save. That strategy, however, will not work if the app isn’t responding.

The keyboard shortcut will.

Don’t turn off the computer. If you turn off your Mac during a software update, the update will be halted.

If your Mac is only partially updated, it will not function properly since its systems will not be able to communicate with one another.

Wait at least a few minutes after shutting down your Mac before attempting to restart it. Allow time for it to calm down and reset.

Then restart your Mac, wait for it to fully power-up, and then reopen any apps or web browsers that were previously open.

If your Mac is doing a software update, turn it off. 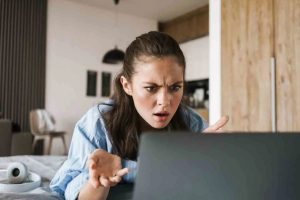 What Causes Apps to Freeze on a Mac?

Everyone despises it when their favourite software or web browser suddenly stops working.

Your cursor has been replaced by a spinning beach ball that taunts you and says you can’t accomplish anything.

But why do programmes and browsers suddenly become unresponsive?

Some of the reasons your Mac and its browsers may stop working from time to time are listed below.

Apps you’re using on your Mac will freeze if it’s utilised almost continually.

Your Mac will struggle to perform properly if it becomes overworked, causing the programmes you’re using to become unresponsive.

Take a break and close your computer for a few hours if you’ve been working on your Mac for a long time and programmes start to stall.

When your Mac overheats, all of its systems work overtime to try to cool it down.

This depletes the systems that support the programmes you’re using, causing them to freeze.

A laptop tray is also available for purchase. These trays frequently have fans to keep the computer cool.

This will allow you to work on your computer for extended periods of time.

If you haven’t updated your Mac or the programme you’re using in a while and fresh updates are available, now is the time to do so.

This guarantees that the app version you’re using is supported.

Older versions of programmes are sometimes incompatible with the latest macOS software.

You will most likely be unable to open the app if this is the case.

Apps will freeze if your Mac has been infected with malware or a computer virus.

Mac systems, on the other hand, are well-protected against viruses and malware.

Your Mac will become overworked if you have too many apps or tabs open, and the apps and browser will freeze.

If your browser is frozen or unresponsive because you have numerous tabs open, try closing a couple of them.

This should take care of the problem.

How to Lock the Keyboard on a Mac? [Solved!]

Do Bose Noise Canceling Headphones Have a Microphone?