How to Quickly Split Screen on Mac

Split-screen mode is offered for the first time with the release of OS X El Capitan in 2014. In prior versions of the Mac operating system, you couldn’t see two programmes at the same time, which is a bit of a bummer.

Some programmes, particularly third-party apps downloaded from the Internet, may not allow split displays. Let’s say an app refuses to take up half of the screen, despite the fact that all of the necessary settings are in place.

In such a scenario, it’s reasonable to presume that the programme was never designed to be used in this way. It’s worth noting that this functionality is supported by the majority of Apple’s default programmes on the MacBook.

Requirements for Split Screen View on your Mac

Split-screen mode is offered for the first time with the release of OS X El Capitan in 2014. In prior versions of the Mac operating system, you couldn’t see two programmes at the same time, which is a bit of a bummer.

Some programmes, particularly third-party apps downloaded from the Internet, may not allow split displays. Let’s say an app refuses to take up half of the screen, despite the fact that all of the necessary settings are in place. In such a scenario, it’s reasonable to presume that the programme was never designed to be used in this way. It’s worth noting that this functionality is supported by the majority of Apple’s default programmes on the MacBook.

How to Split Screen on a Mac: Methods

The quick and simple way

1st step: To begin, open two or more windows in a split-screen arrangement that you want to be paired together. Anything from browser windows to apps, documents, and whatever else you desire may be included. Look for three coloured dots in the upper-left corner of your first window: red, yellow, and green.These are the individuals in charge of the functioning of the window.

Step 2: If you hover your mouse over the green dot, two small “expand” arrows will appear. When you tap and hold this green dot, a menu opens with the following options: There are three options: full screen, tile window to the left of the screen, and tile window to the right of the screen. The window will take that area of your screen if you select the second or third option. 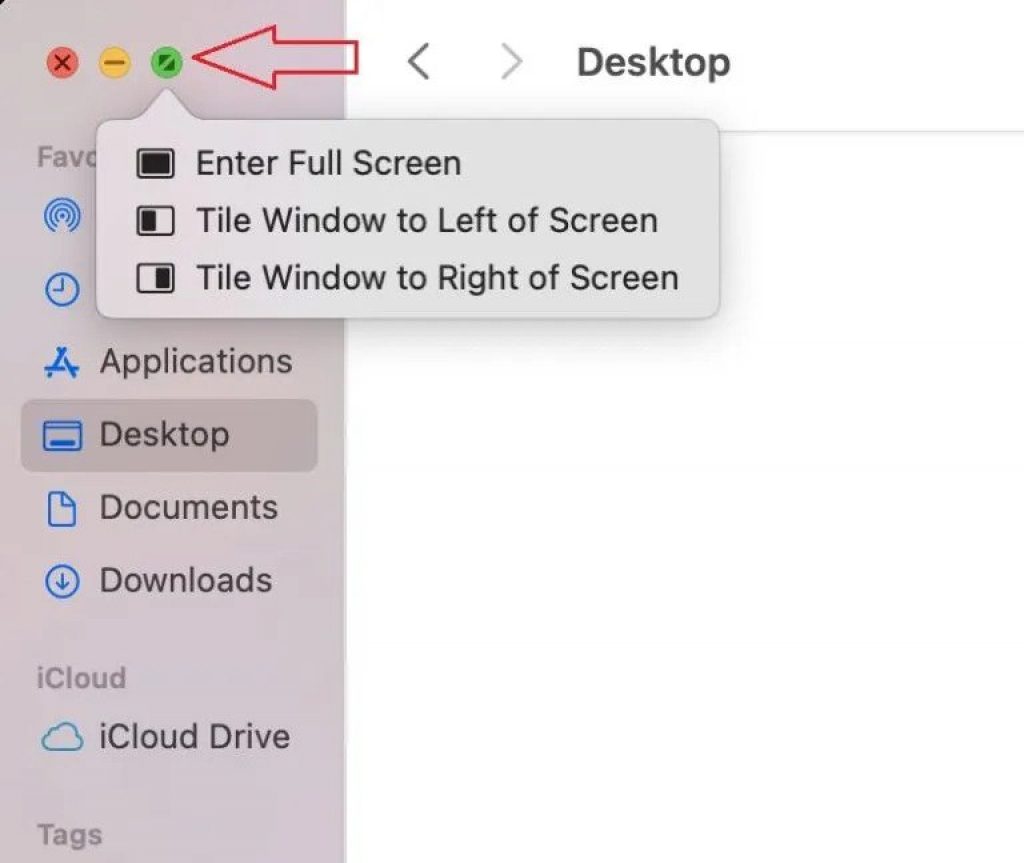 Step 3: One half of your Split View is now complete. On one side of the screen, a thumbnail of any other open windows will display, and the primary app will take up one-half of the screen. Select the other window you want to use to fill in the blanks in Split View mode. 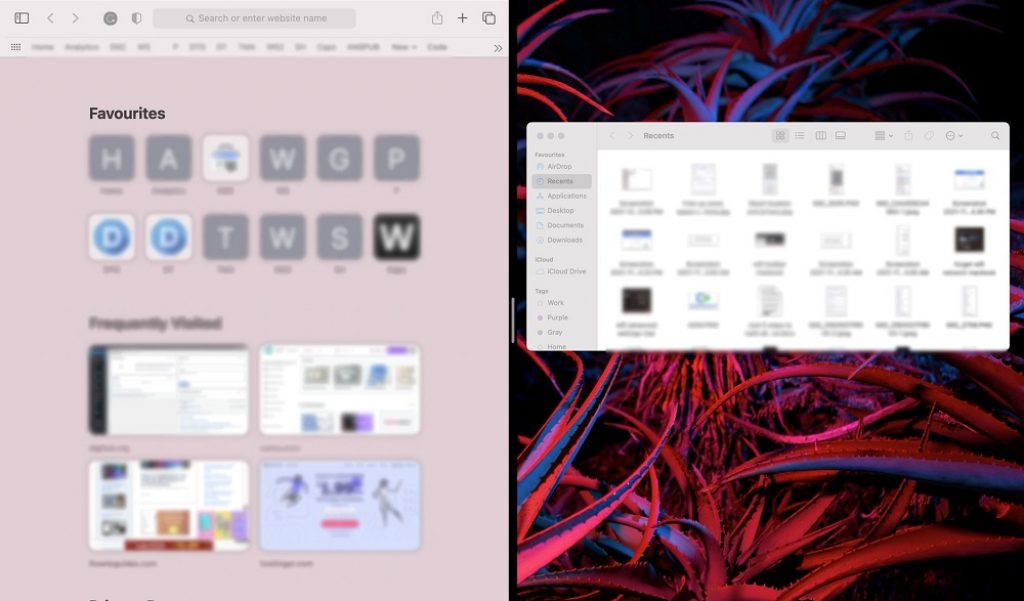 2. How to Enable Split View on Your Mac Using Mission Control?

On a Mac, using Mission Control to bring up Split View is also a lot of fun. However, it necessitates more steps than the prior procedure.

Step 1: On your Mac device, open any programme window in full-screen mode. 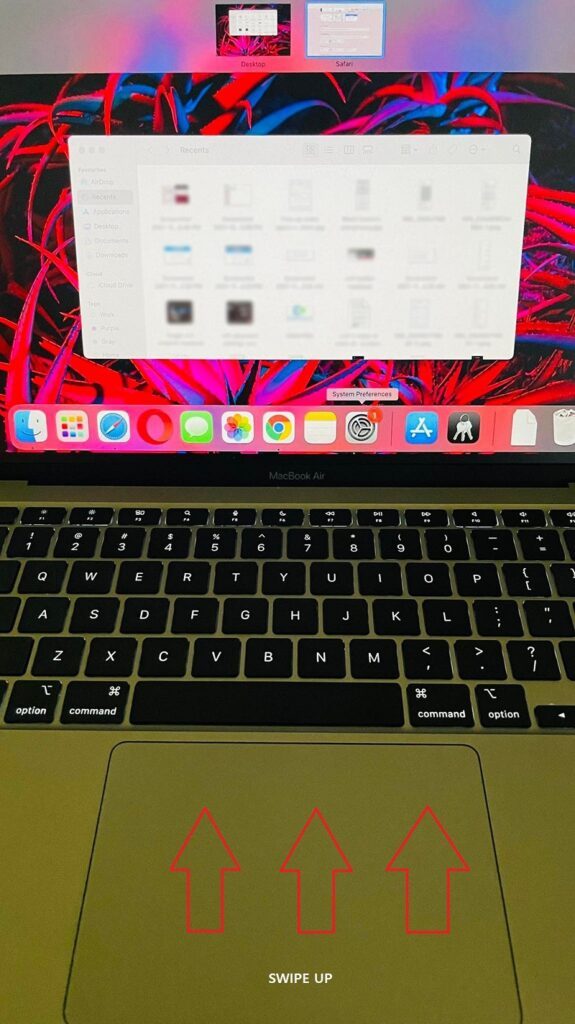 Step 3: In full-screen mode, drag an app window over the app thumbnail.

Step 4: And that’s all there is to it! Both programmes will immediately switch on your Mac.

3. Use the trackpad to switch between windows and applications

Want a more easy way to manage your windows, perform split-screen activities on your Apple computer, enter full-screen mode, or minimize windows that aren’t now required? On your Mac, you may expand the functionality of a split-screen extension with a trackpad gesture, which is an upgrade over the prior option.

Swish is a free programme that allows you to manage the windows on your desktop with basic trackpad gestures. Sliding one window to the right and the other to the left is all it takes to snap two windows together. You may go from full screen to minimize by swiping down or up. These and many other intuitive movements are described in detail in the app’s settings.

4. Use Split View on the Mac to access other applications

Multitasking and Mission Control are inextricably linked. On a Mac, Mission Control may be used to launch other apps in a split-screen mode. Here’s how you could go about it:

As the initial step in this operation, activate Mission Control. Simply swipe up with three or four fingers on the trackpad or two fingers on the Magic Mouse.

Step 2: Now all you have to do is choose the thumbnail of the programme you want to use to transition between Split View and other windows. If no programme is presently active in the background, the Dock or Launchpad can be used to access it.

You may also switch using a multi-touch motion, such as swiping four fingers over your trackpad.

What is the best way to customize your split-screen view?

Would you be willing to switch sides? You can move a window from one side of the screen to the other in a split view by clicking anywhere on its gray menu bar and dragging it to the other side. When using the split-view option, keep in mind that the menu bars are hidden by default. If you move your pointer to the top of the screen, the menu bars will appear.

What is the best way to exit split-screen mode on a Mac?

It’s simple to switch off split-screen mode once you’ve gotten your fill of it. In either window, move your mouse cursor to the top of the screen until the gray menu bar appears. When you click the green circle button, you’ll be pulled out of split-screen mode. Otherwise, hover above the “Exit Full Screen” icon and click it.

Is it possible to access the split view on a Mac running an earlier version of macOS?

In macOS Mojave, macOS High Sierra, macOS Sierra, and OS X El Capitan, activating Split View is nearly identical to enabling Split View in previous versions of the operating system. However, there are some minor variances, so let’s have a look at how it’s done;

Why isn’t my Mac allowing me to use split-screen mode?

Step 1: Open the two programmes you wish to run side by side on your Mac and click “Open.”

Step 2: To select Full Screen, click and hold the green “full-screen” button in the upper left corner of the window.The window shrinks while you keep the full-screen button pressed, allowing you to drag it to the right or left side of your Mac screen.

Step 3: Press and hold the button for a few seconds before releasing it. To use both windows together, select an application window on the other side of the screen. That’s the only thing I have to say about the subject. Split-screen mode may now be used to improve productivity.

Make sure you’re not in fullscreen mode before proceeding. When utilizing the traditional windowed view, a split-screen option is not available. Finally, go to System Preferences > Mission Control and see whether any of your displays have Displays with Separate Spaces turned on..

Make sure you’re not in fullscreen mode before continuing.. A split-screen option is not accessible in the conventional windowed view. Last resort, check System Preferences > Mission Control to see if any displays have Displays with Separate Spaces enabled. Turn it on if it’s not already.

Check to see if your Mac is running macOS 1 or later..11 or later before attempting to access that option. To find out what operating system version you’re running, go to the Apple icon in the upper left menu and select “About This Mac.”On a Mac, bringing up Split View using Mission Control is also a lot of fun.. However, it necessitates more steps than the prior procedure. Let’s have a look at how it works in practise:

With each step ahead in your professional or educational career, you’ll almost certainly find that you need to boost your productivity and multitask more. Although the number of open windows and programmes on your Mac continues to grow at an exponential rate, the quantity of vacant screen space appears to be reducing.

Unfortunately, the settings and possibilities of the split-screen mode are significantly limited. If two programmes on the same screen aren’t enough for optimal productivity, Split View will most certainly fail you. You’ll almost certainly devote a large amount of effort to finding the ideal app for your needs. We’ve arrived at this point. You’ll need a customized application for this. In addition to Swish, a few other programmes, such as Magnet or Split Screen, offer enhanced split-screen functionality.

How to Install Windows 11 on Mac Without Boot Camp

How to Backup iPhone to an External Hard Drive