Gaming consoles are evolving into a wide range of devices.

Gone are the days when consoles were solely used for games.

There are apps for watching movies, listening to music, and even chatting with friends and family. Virtual reality is also becoming a big part of gaming.

VR headsets for PlayStation and PC have been produced in recent years.

Many people want to know if there is a virtual reality product for the Xbox.

Is the Xbox One X VR-capable?

Unfortunately, no version of the Xbox supports virtual reality. This means that when it comes to consoles, PlayStation has a tight grip on the VR market. This does not rule out the possibility of a VR product for Microsoft’s home consoles in the future.

No one knows for sure what Microsoft has in mind, but as of now, the company has no plans to add VR functionality to its latest platform.

Many people believe Microsoft has lost faith in the virtual reality sector.

With a VR project, the tech giant may struggle to make a profit.

Although the project as a whole failed, Microsoft has not given up.

In recent months, rumors of a HoloLens 2 have surfaced.

According to sources, Microsoft is collaborating with the military to develop a practical augmented reality headset for soldiers to use.

If the HoloLens proves to be a success, whether in the military or in the general sector, it’s not unreasonable to expect Microsoft to develop a headset for the Xbox Series X or a future system.

Is it possible to link Oculus to Xbox Series X?

The Oculus, which started out as a PC add-on that connected directly to a computer’s graphics card, is now available as a standalone device that doesn’t require any additional hardware to play games.

There is no way to use any of the Oculus hardware with an Xbox Series X, though.

Microsoft and Meta may form a partnership in the future, allowing Oculus headsets to be used alongside Xbox.

This would allow Xbox and other publishers to build games on the Series X without having to spend time researching and developing their own hardware. 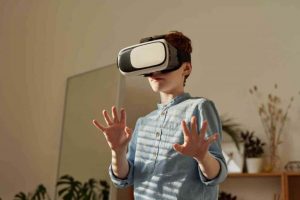 An intriguing message emerged on the Xbox shortly after the debut of the Xbox Series X and Series S.

When Microsoft formally answered, though, players were dragged away from their fantasies.

Microsoft is not focusing on virtual reality, according to a spokesperson.

The comment echoed Xbox’s Phil Spencer’s prior statement that the company is focusing on what gamers want, and no one is clamoring for virtual reality.

It’s no secret that Phil Spencer and his Xbox team regard virtual reality as a niche product.

He even went so far as to claim that virtual reality does not fit into his game vision.

The good news is that VR on the Xbox Series X hasn’t been ruled out totally by Spencer.

He believes that the future is unpredictable and that virtual reality could become a widespread entertainment alternative.

This would almost certainly push Microsoft to create their own virtual reality experiences.

When Microsoft Mixed Reality was revealed, it was yet another teasing for Xbox lovers.

Mixed Reality is a system of headsets and devices that work together to give virtual reality and augmented reality experiences to PC gamers.

While Microsoft did not design all of the components, firms like Valve were developing their own devices to work within the Microsoft ecosystem.

When HP debuted the Reverb G2 headset, it joined the fray.

While Microsoft continued to develop its own virtual reality ecosystem, the project never truly caught on with consumers, leading some to believe it never launched at all.

In reality, Microsoft is still working on the Windows Mixed Reality platform.

Given Microsoft’s track record with projects like HoloLens and Mixed Reality, it’s unlikely that ambitions to integrate VR inside the Xbox Series X will ever materialize, but gamers can hope.

PlayStation has a stranglehold on the market.

When it comes to virtual reality, console gamers have plenty of options.

Sony considers PSVR to be a success, having sold over five million devices since its release.

It even generated a sequel, the PSVR 2, that has yet to be released.

While five million units is a small number in contrast to the number of consoles Sony sells, Sony has demonstrated complete faith in the device, releasing dozens of PSVR games each year since its launch.

Popular triple-A games like Resident Evil 7 and Skyrim have even been launched in virtual reality.

What Is Ext On A PS4 Controller? [Explained!]