Home » Tech » Should I Leave My Sonos Move on the Charger?
Tech

Should I Leave My Sonos Move on the Charger?

The ability to move my Sonos Move around the house is fantastic, but when it comes time to clean up after a party, I make it a point to bring it back to the location where I plug it in to charge so it can recharge.

Due to the fact that I haven’t had the opportunity to listen to music on my Sonos Move as much lately, it spends the majority of its time plugged into the wall.

When I realised it had been a week, I felt a wave of panic wash over me. What is the maximum amount of time you can leave a Sonos Move plugged into a charger?

Should I leave my Sonos Move connected to a power source?

You have the option of leaving your Sonos Move plugged into the wall for a day or two at a time without causing any harm. In any case, it is not recommended that you leave a battery-operated device plugged in for an extended period of time. This causes the battery to become inactive, and an inactive battery will gradually lose its ability to hold a charge as time goes on.

Sonos designed the Move to be able to remain on the charging base for extended periods of time in order to improve the overall quality of life for their customers.

Maintaining proper electronics and battery care is a difficult regimen to maintain over time.

Sonos determined that it would be best to incorporate features into the Move that would allow for human-like behaviour to occur without degrading the speaker’s overall performance and functionality.

Additionally, they included other battery-saving features in the speaker, in addition to a charging base that prevents overcharging and overheating while charging.

Sonos Move will automatically turn off the power if the speaker is left on and no music is playing for a predetermined amount of time, according to the manufacturer.

This feature is referred to as “Suspend Mode,” and it is activated automatically.

Sonos claims that the suspend mode can store battery power for up to five days, depending on how much music is played.

Using a USB-C cable rather than the charging base to charge your Sonos Move is not a good idea if you plan to use the device for an extended period of time.

This is not to say that the USB-C connection is harmful to the health of the Sonos Move, but rather that the likelihood of overcharging or overheating is significantly higher.

Once the Sonos Move has been fully charged, remove the USB-C cable from the speaker and store it somewhere safe.

Because of the damage to the charging base, you may have started charging your Sonos Move with a USB-C cable. Sonos and other brands sell replacement charging bases on their websites.

Purchase of a replacement is something I would strongly recommend.

The charging base is more secure and makes it easier to properly care for your Bluetooth speaker than a standard charging cable.

Is it possible to leave my Sonos Move plugged in?

You have complete freedom to leave your Sonos connected to the charging base.

The charging base was created in such a way that it alleviates the common concerns associated with leaving a device connected to an active charger while it is not in use.

The Sonos Move already has an impressive battery life of ten hours of continuous use, which is especially impressive considering the incredible audio quality it provides and the power drain caused by Wi-Fi and Bluetooth connectivity.

Because the battery is built into the device, it will eventually need to be replaced, just like any other battery.

This is most likely the reason you are concerned about leaving the device connected to the charging base for an extended period of time.

Older devices were susceptible to overcharging and overheating, which could cause internal components to expand, break, or melt.

Sonos designed the Move to be a rugged Bluetooth speaker that produces audio that is suitable for home entertainment.

They gave special consideration to the device’s durability and long-term usability. 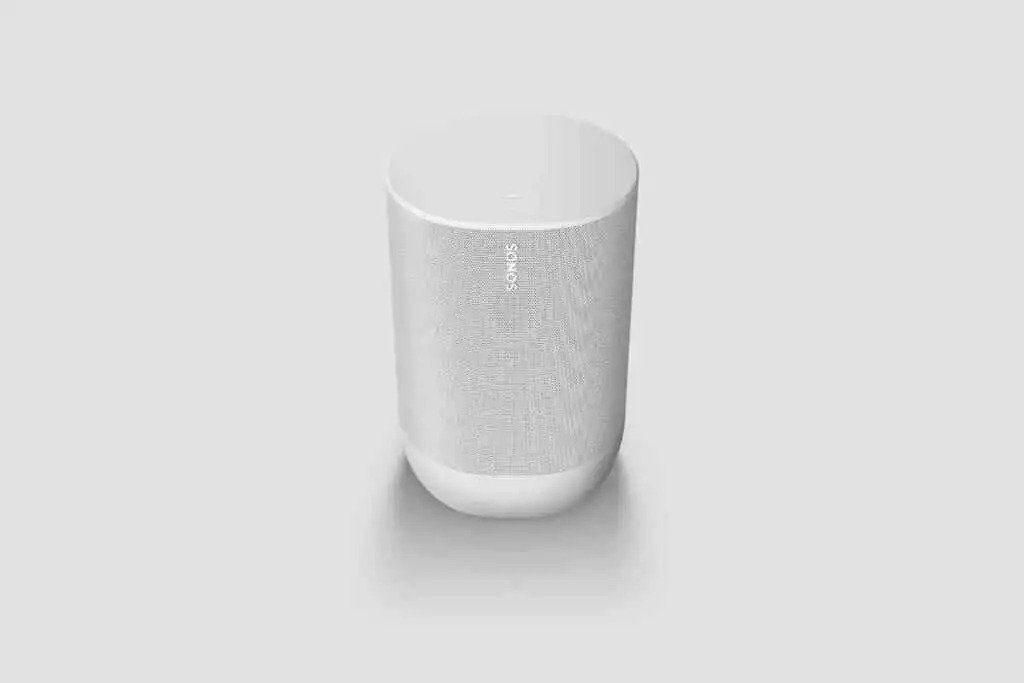 Specifically, this meant developing a charger that was safe to use excessively and designing a system that would maximise the battery’s overall lifespan as much as it possibly could.

After the battery has been fully charged, you can safely leave your Move on its charging base until the battery is completely charged.

It will not overheat or charge excessively. It will also not unnecessarily reduce the number of recharge cycles left on the battery.

The Sonos Move is a reliable portable Bluetooth speaker that can withstand the rigours of travel and exploration thanks to its efficient charging method and software tricks that conserve battery life.

While battery conservation techniques may appear to be unrelated to the safety of the charging base, they are in fact very closely related.

Generally speaking, the longer a speaker’s battery can remain charged and provide power for your audio experience, the less time you’ll need to spend with it on a charging base.

When should I unplug my Sonos Move from the wall?

Even with Sonos’s high-end quality add-ons to extend the lifespan and battery capacity of your Move, you will want to use the Move on battery power from time to time for various reasons.

If the battery is left stagnant or inactive for an extended period of time, the charge will be depleted and the overall charging capacity will be lost.

Once a battery begins to degrade, it is impossible to turn it back.

Even though the device can withstand more abuse than other speakers, following best practises is the most effective method of preserving the battery life.

You are not required to use the speaker until the battery is completely depleted. It only requires a small amount of electricity to be passed through it on a regular basis.

This aids in the preservation of the battery cells’ life and activity.

Connect the charging base to a surge protector to protect against power surges.

If you do not already have a surge protector, you should purchase one. The threat of electric power surges to any home, regardless of where you live, is real, even if it poses a lesser threat to your home than in other locations.

In the event of a power outage or other natural disaster, it may be advisable to remove your Sonos Move from its charging base, even if you have a surge protector.

When it is not in use, turn off the power.

Fortunately, your Sonos Move has a suspend mode that will take care of this for you. However, there are times when you may begin an infinite playlist without remembering to hit the pause button.

Turning off your Move after you’ve finished using it should become second nature to you.

Ensure that water does not enter the casing or ports.

Unwanted discharge and damage can occur when liquid is used.

Despite the fact that the Move is a rugged speaker, water is still a conductor of electricity.

Keep your Sonos Move away from the direct sunlight.

High temperatures have the potential to cause serious damage to any battery.

If you’re using your Sonos Move outside, make sure the sun isn’t shining directly on it and heating it up too much. If it’s too hot to touch, it’s almost certainly too hot to be outside in general.

That concludes the list of recommendations you should follow to get the most out of your Sonos Move.

It should be simple to incorporate these practises into your daily routine, but even if it proves to be difficult, they are not required behaviours in order to have a positive experience with your Sonos Move speaker system.

The fact that only a few situations were recommended for keeping your Move away from the charging base is likely something you’ve noticed.

This is due to the fact that there is little to no risk associated with leaving the speaker attached to the base for an extended period of time.

The only issues that need to be addressed are those of an electrical nature and are mildly uncommon.

This is fantastic news for owners of Sonos Move speakers who are concerned about their speakers being damaged.

Sonos made certain to accomplish this through the use of a solid and thoughtful design that takes human actions into consideration.

When dealing with such a well-designed device, regular electronic device maintenance and care will ensure that the Sonos Move remains functional for many years to come.

Don’t be concerned about leaving it on the charging base; however, I always recommend that you use a surge protector with any electronic device that is considered to be valuable.

As long as you protect your speaker from damage caused by natural disasters, it will last you for six to eight years before it needs to be replaced or repaired, even if Sonos predicts that you will need to replace the battery in three years.

Frequently Asked Questions are listed below.

Is it possible to replace the battery in the Sonos Move?

There’s good news! The battery can be completely replaced if necessary. Sonos recommends that you replace your battery every three years, according to the company.

The replacement battery is only $69, which is a bargain. To install a new battery, you’ll need a screwdriver and about five minutes of your time.

My Sonos Move charging base is not functioning properly. Is it possible to get a replacement?

Despite the fact that off-brand charging bases are less expensive, it is always recommended to stick with the manufacturer’s brand in order to avoid problems.

I forgot to bring the charger with me. Is there an alternate method of charging my Sonos Move?

The Sonos Move does not require the use of the charging base to be powered. With a USB-C connection, you can also charge the internal battery without having to use an external charger.

The USB-C connection, on the other hand, does not have the same level of safety features as the Sonos Move charging base.

After the battery has been fully charged, you will not want to leave the Move connected to the USB-C charging cable for any length of time.

However, the risk of overcharging or overheating is still lower than it was with older devices, but it is still a possibility.

How do I use Do Not Disturb shortcuts?

Can You Overcharge A Bose SoundLink?