Home » Tech » What Are The Minimum Specs For A Streaming PC? [ANSWERED!]
Tech

What Are The Minimum Specs For A Streaming PC? [ANSWERED!]

Are you considering pursuing a profession as a gamer? Do you want to learn more about streaming? Is Twitch becoming more and more appealing to you?

If you want to stream from a PC, Twitch has some recommendations for the very minimum requirements you’ll need for it to operate successfully as a streaming PC on their platform.

If you wish to stream from your computer, you’ll need the appropriate hardware.

PC streaming has a lot of advantages over other consoles because you have more options for customizing your experience.

When it comes to gaming, PCs are far more adaptable — and they are also easier to alter.

While Twitch provides its own recommendations, I’d like to make a few of my own.

These suggestions are intended to improve your streaming experience as much as possible, providing smooth transitions and faster load times while you stream your game.

We’ll go over the very minimum as well as the ideal specifications for the smoothest possible gameplay streaming.

Here are my suggestions for building the finest streaming PC possible, from graphics cards to RAM.

What Are The Minimum System Requirements For A

Unless you’re using a Mac, a streaming PC should have at least an Intel Core i5-4670 processor (or its AMD equivalent), 8GB of RAM, and Windows 7 or newer. A minimum requirement for streaming is an Ethernet connection with an upload speed of at least 3 megabits per second.

Furthermore, you may wish to use a secondary computer so that you have one for gaming and one for streaming, as many well-known streamers do.

What are the exact specifications you’ll need to stream via PC?

How can you create your own streaming PC on a shoestring budget?

How can your CPU, graphics card, RAM, storage, motherboard, and power supply unit (PSU) be optimized for streaming?

Continue reading to learn more about the various specifications you’ll need for a streaming PC.

What does Twitch have to say about it?

Twitch requires that PC streamers have an Intel Core i5-4670 processor (or its AMD version), 8GB of RAM, and Windows 7 or newer, as stated previously. 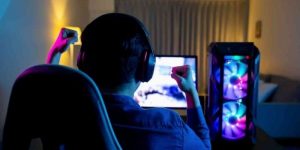 How can you make a streaming PC on a shoestring budget?

Consider the resolution you’ll be streaming at before you get started.

The basic minimum is 720p, however, 1080p is far better and is what most streamers utilize.

As a starting point, aim for a resolution of 1080p at 60 frames per second.

In general, the higher the frame rate and resolution, the better the hardware required to achieve that goal.

If you don’t mind not streaming in 2K and are on a budget, I have several suggestions for you below.

What are the bare minimums for a fantastic PC streaming experience?

While Twitch recommends a dual-core CPU and 4GB of RAM for their platform, this is only for Twitch.

This does not include the hardware that will be required to broadcast the game.

To play that game, you’ll need the best software available, which varies with every game.

Let’s take a look at the game New World, which came out in September of 2021.

Older titles, like Fortnite, require a 2.6 GHz Intel i5 processor or greater, at least 8GB of RAM, and an AMD 7870 or Nvidia GTX 660 with 2GB of VRAM. All of this is in addition to Twitch’s requirements.

My point is that Twitch’s minimum qualifications are absolutely nothing more than that.

As a result, here are some recommendations for a better streaming experience.

When it comes to streaming games from your PC, 6 cores is better than 5.

This makes you a little more future-proof in terms of games, and you won’t need to update for a few years.

Although the older AMD Ryzen 5 3600 is not as efficient as the 5600X, it is still a 6-core processor that uses the same AM4 socket, so you can easily upgrade later.

When it comes to your PC and gaming, your graphics card does the majority of the hard lifting.

A non-Ti model will be less expensive, but it will not perform as well.

It boasts 2048 stream processors and more than twice the performance of the PS4.

In terms of RAM, 16GB is great because it is what games currently demand as a minimum requirement.

For streaming, you can use a regular hard drive, but you’ll need more storage space for actually recording and storing videos. You can start with an 11TB hard drive, and you can simply erase older data to make room for newer ones.

The Western Digital Blue and the Seagate BarraCuda are both excellent hard drives.

For speedier boot speeds, you can get a smaller SSD to store your operating system.

This is more cost-effective, and you can always upgrade your project files to a larger HDD.

Because here is where all of your components are housed, you’ll need a supported motherboard.

Just keep in mind that a Ryzen processor will not function in an Intel LGA 1200 socket.

Get a motherboard with four RAM slots if you wish to increase to 32GB of RAM later.

The Ryzen processors I stated work well with the Gigabyte B550M DS3H motherboard.

Getting an older motherboard to go with the AMD Ryzen 5 3600 will save you money.

To support PC streaming, your power supply must have an efficiency rating of at least 80%.

Because the GPU and CPU consume the most power, your PSU must be able to match their demands.

A 500-watt power source should suffice.

Both the Thermaltake Smart 500W and the EVGA 500 W1 have 5-year warranties and provide voltage protection.

As a result, your computer will require the appropriate components to accomplish this.

You’ll almost certainly need to upgrade some components of your present PC in order to turn it into a super-cool gaming PC that can also stream video.

How to Fix Bluetooth Lag

What RAM Does the PS5 Have?