Home » Tech » Why Are Songs Skipping On Apple Music?
Tech

Why Are Songs Skipping On Apple Music?

Nothing is more annoying than your life’s theme song starting to skip while you go about your business.

According to a simple search, this is what some Apple Music subscribers are experiencing.

Fortunately, this is not a typical occurrence, but it can be aggravating for consumers who are inconvenienced.

What is the cause of the app’s and service’s poor performance?

Why Do Apple Music Songs Skip?

On Apple Music, users have reported two sorts of skipping. One skips songs totally, while the other skips like a damaged CD, or lagging as it’s known in the industry. There isn’t a single underlying cause for this, although it may be traced back to a connection, software, or hardware issue.

Examine the specific problem you’re having and determine what could be causing it, as well as some potential answers.

It’s possible that skipping tracks is an occasional problem that affects certain songs but not others.

You could also notice that a song reaches a specific point in the track before moving on to the next.

This type of problem usually has two probable origins, both of which are readily remedied.

You might only have enough to start the music and engage the app.

You may, however, lose connectivity before the file finishes caching.

Examine your connection’s speed and how well you’re functioning.

With a program like the SpeedTest.net app, this is simple enough.

This method may even be used to check your cellular data connection.

While you may have a good enough connection to check email, browse the web, and use social media, it may not be sufficient to handle streaming music.

Pay attention to both the ping and the download speed while checking your link.

You might have a fast download speed but a very high ping, or the time it takes for the server to react to queries.

For streaming any type of material, a ping of fewer than 50 milliseconds is ideal.

If your download speed is slow or your ping rate is excessive, consider adjusting how you connect to the Internet.

If you’re going to be in an area with a shaky signal, download your music while you’re connected to the Internet so it runs more smoothly.

Apple Music, like every other software, receives updates regularly. On Apple devices, however, these are included in the iOS upgrades.

Go to Settings > General > Software Update if you’re not sure if an iOS update is available.

Whether you’re using Apple Music on an Android device, see if there’s an update available in the Google Play Store.

The way the app communicates to the Apple servers may change as a result of these upgrades.

You’ll need the most recent version of the app to keep it working properly. 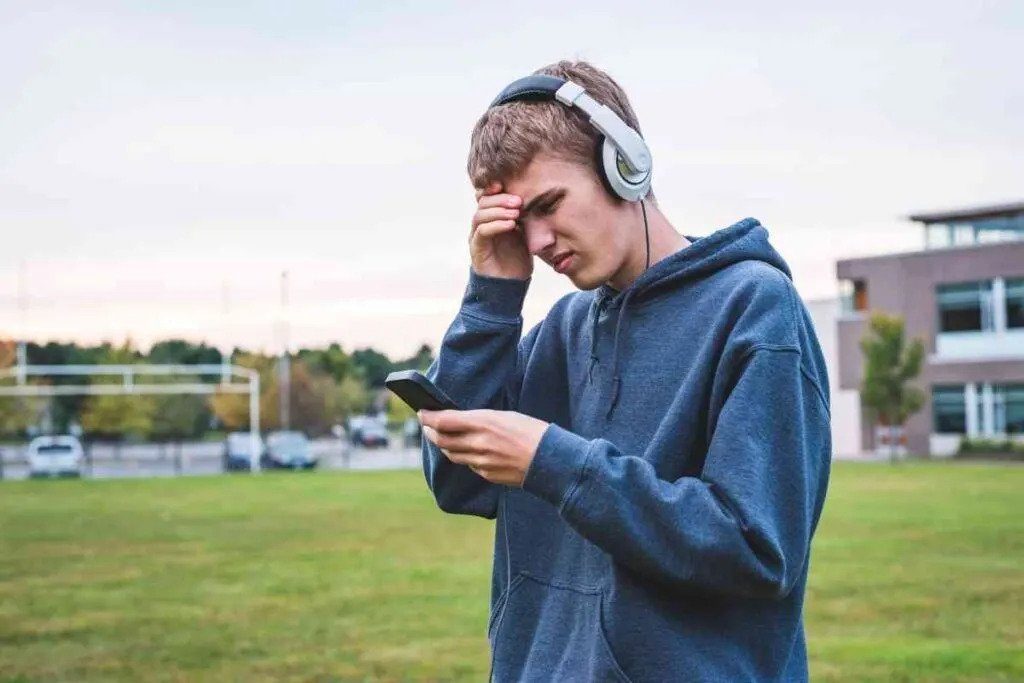 A song that continues skipping, either lagging or moving from one place to another, is frequently more irritating and disruptive than skipping tracks.

There might be several causes for this, and you may need to try each conceivable remedy until you locate the culprit.

Many of the issues you’ll face with Apple Music might be caused by a bad internet connection.

Check your connection using the methods above to see if it helps you solve the problem.

Downloading the troublesome songs to see if they play better is an easy method to test this notion.

A cache is created when your phone or computer downloads something, whether it’s a website or an app.

This is a temporary file that will help your device run faster.

If you’ve played the music previously and are having trouble, the cached file may be the problem.

Cache difficulties may be resolved in several ways.

Begin by closing and reopening the app.

If it doesn’t work, try completely resetting your phone.

After that, you may need to remove the iCloud cache. To access the Sync Library, go to Settings > Music > Sync Library.

This will only show if you have an Apple Music subscription. Toggle this off, then launch the Music app, which will clear your device’s cache data.

Play a troublesome song to determine whether the problem has been rectified.

You can re-enable iCloud sync after testing.

You may have a corrupted music file, similar to a corrupt cache file if you downloaded the file to your phone.

Your music files might be damaged in several ways, but regardless of the cause, the solution is the same.

Locate the troublesome tracks in your collection in your Music app.

Tap Remove, then Remove Download after pressing and holding the track.

You can then try to download a new copy or listen to the music while it is being streamed.

After you’ve erased the local copy, consider cleaning your cache using the methods outlined above.

To assist you to limit data use, your smartphone provides multiple settings for the audio quality it plays.

This, on the other hand, might accidentally ruin your listening experience.

Go to Settings > Audio > Cellular Data on your Apple iPhone to verify your music quality options.

Check to see whether High-Quality Streaming is turned on and if it is, turn it off. This only works if you’re listening to your music via streaming rather than a local copy.

Issues with the Apple Music App

It’s always conceivable that the Music app is to blame for the issues you’re having. If you’ve already restarted the app and your phone, you might wish to remove it and reinstall it.

Apple, thankfully, made native apps detachable, which has not always been the case.

Simply press and hold the music app icon, then select Remove App from the drop-down menu.

After that, go to the app store and search for Music, then reinstall it.

A problem with your Bluetooth device, if you’re listening through one, is another typical reason for skipping throughout a song.

You’ll know there’s a problem since it’ll only happen while you’re utilizing the gadget in question.

To begin, ensure your device is fully charged.

After that, double-check that your device is within range, which may vary depending on your surroundings. Place the Bluetooth device near the music player to see whether this is the case.

It’s also possible that you’ll have issues connecting to the Bluetooth device.

Turn off and on the Bluetooth to see if that helps.

You might also disconnect the two devices and attempt pairing them again.

Can You Charge Airpods in Someone Else’s Case?