Why Is My JBL Speaker Blinking Red? (Explained!)

With over seven decades of experience in the manufacturing of audio equipment, including loudspeakers and headphones, JBL has positioned itself as a leader in the industry. JBL offers a diverse selection of speakers to meet the needs of any budget and sound requirement.

When looking for a dependable speaker that is also portable, JBL is a brand that you should consider purchasing. I’ve had a positive experience with JBL speakers in the past. Some of the JBL speakers with which I have personal experience include the JBL Go 2, the JBL Flip 5, the JBL Charge 4, and the premium-quality JBL Boombox 2, among others.

The LED indicator, on the other hand, is a feature that all JBL speakers have in common. Essentially, this is a small status light that is used to indicate the various states and actions that the speaker is currently engaged in. Have you ever questioned why the red light on your JBL speaker is blinking?

That, as well as other aspects of the LED indicator light, will be discussed in greater detail in this article.

What is the cause of my JBL speaker’s red blinking light?

A JBL speaker that is blinking red indicates that the battery is running low. Though the exact meaning of this varies from model to model, it is typically an indication that your speaker needs to be recharged. It is possible that the intensity and frequency of the flashing LED will vary depending on the JBL model.

Here are a few more illustrations:

JBL Charge 3 Blinking Red – According to the user manual, when your JBL Charge 3 blinks red, it indicates that the battery is low and that the device needs to be recharged immediately.

When the light turns solid blue, it indicates that the battery in your speaker has been fully charged and that it should be unplugged from the power source. The JBL Charge 3 Bluetooth speaker requires approximately three and a half hours to fully charge.

JBL Go 2 – The JBL Go 2 is a compact and portable Bluetooth speaker that is designed for travel. It has only one LED on the front of it, which will indicate whether or not the speaker is working. When the battery life of the JBL Go 2 is running low, the LED will begin to blink red. When it is connected to the power unit, it will remain solid red until it is fully charged, at which point it will turn off.

When the JBL Flip 3 speaker is low on battery power, the first LED dot on the speaker will blink red to indicate that it needs to be recharged. According to my observations, the charge lasts between ten and eleven hours.

This is only true when the battery is fully charged and the music is played at half volume. If you have any problems with your Flip 3, you can contact one of the JBL authorised dealers. You cannot replace the batteries in your Flip 3.

This model comes with a USB cable that can be used to charge it from a power bank or from your computer. Because it uses a Micro-USB cable, which is the same as that used by ordinary smartphones, you can also charge it while driving with your standard USB adapter.

There is nothing more you need to be concerned about than ensuring that you always observe that only the recommended charging voltage is maintained.

How and Why is the Charging Indicator Important?

The fact that you have to charge your speaker every hour is inconvenient. Consider what would happen if your speaker’s battery ran out of power after only two or three songs were played through it.

As a result, when shopping for a portable speaker, battery life is an important factor to consider. Because of this, all JBL speakers are equipped with an LED indicator and, in some cases, a voice command to alert you when the speaker’s battery is running low.

In general, you can expect your speaker to last for approximately 24 hours, but this will vary depending on the type of batteries used as well as the care you take when charging your battery. Smaller speakers have smaller batteries and will need to be recharged on a regular basis, for example, after an hour or two of playback.

The duration of service defines the battery life of a speaker, which is also known as the average battery life, despite the fact that larger batteries may have more extended playtime and can last for an entire day.

Because they are intended to warn the user if the battery is about to be completely discharged, they are equipped with a blinking red LED to do so. This will provide you with an alert when it is time to charge your battery without affecting the battery’s overall life. 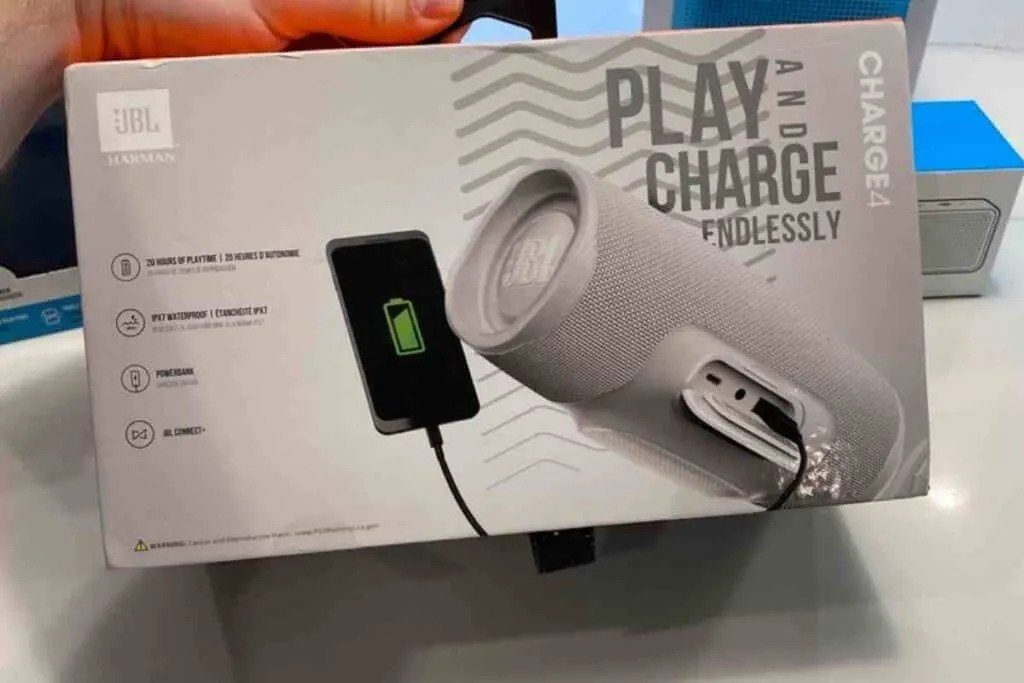 All JBL portable speakers are also equipped with a USB port, which can be used for charging and networking. If you intend to use your JBL Bluetooth speakers outside more frequently, you will not be able to carry an adaptor and cable with you everywhere you go.

Therefore, the USB ports came in handy because they allow you to connect your speaker to a power bank, which increases its convenience even further. If a wall outlet is not available, you can connect the charging cable to any other device to charge your JBL speaker. Always check, however, that the power source is operating at the recommended voltage.

1. Yes, and once the battery is fully charged, the light will turn off on its own.

When you have a low battery indicator, the red LED will continue to flash until you plug in a charger.

2. Can you tell me how to fix my JBL Go when it is charging and the red LED light is on, but it is not charging?

If this occurs, you should double-check your charging apparatus. It’s possible that it’s faulty. If you want to be sure, try charging with a different type of charging unit.

Second, although the lithium-ion battery can be recharged hundreds of times, the amount of charge that it can hold gradually diminishes over time as the battery is used. You should replace your battery if this occurs. Please make certain that you are purchasing your replacement battery or micro-USB cable from a JBL authorised dealer.

3. Can I use a JBL speaker while the battery is being recharged?

Yes. The majority of the most recent speaker designs allow you to continue listening to your music while they charge. This is not recommended, however, because your battery will charge at a slower rate as a result.

Additionally, if you are not using a fast-charging unit, it is possible that it will not reach its full capacity because it is discharging at the same time.

It is recommended that you fully charge your battery before using it in order to get the longest possible battery life.

4. What is the proper way to charge my JBL speaker in order to get the most out of its battery life?

First and foremost, only JBL-branded charging units should be used. Everything, from the cables to the power adapter, is top-notch. Charge your speaker only with the original equipment manufacturer’s recommended accessories.

Second, don’t charge your speaker while you’re listening to music on it. Allow it to charge before disconnecting it from the power source.

Check to see that your cables and accessories are properly connected to the power source and that there is no debris or dust on the charging port or the micro-USB port of your device. Finally, make certain that your charging voltage is never too high or too low in comparison to the manufacturer’s recommended voltage.

5. Is it possible to overcharge the battery of my JBL speakers?

No, not at all. As soon as your device has reached 100% charge, it will turn off the charging circuit. The speaker should be removed from the charging unit after it has been fully charged, however. This is especially true when using a portable power bank. When the voltage on the power bank drops, there is a risk of the charge being drained from the battery to the power bank, which is dangerous (in the opposite direction).

6. How long does it take to charge a JBL Charge 4, and how long can the battery be expected to last?

With a rechargeable Lithium-ion 7500mAH battery built in, the JBL Charge 4 is capable of lasting up to 20 hours on a single battery charge. It takes four hours to fully charge the battery.

From one JBL model to the next, this will be different. However, on the centre bottom of the front of most models (with the exception of the Flip), there is a row of five LED lights. When all of the lights are turned on, it indicates that your battery has been fully charged. One light will be on at a time when the battery is running low, and it will flash red every few seconds.

The LEDs can also be used to display the percentage of charge that is left in the battery. When only five lights are illuminated, it indicates that your battery is approximately 60% charged.

How do I disable Face ID?